What is escaping from the light ?

Around Alex Majoli’s exhibition SCENE, Corinne Rondeau, writer, reviewer and scholar, proposes two times of reflexion on the following theme : What is escaping the light ?

SCENE, Alex Majoli’s photographic serie, evoques immediately the pictorial register by its intensely dark aspect. Nonetheless, the intention is not to fill bodies with darkness, but to redistribute alternatively places in the visible. The spectator does not escape it, nor the photographer himself, reader of Six characters in search of an author from the writer Luigi Pirandello.

Thursday 14 march – 8 p.m
Bodies under a flash of light
SCENE light setting leads to the study of its dark rendered. Thus, we’ll attach ourselves to highlight the production of effects by a baroque reading which, historically, calls blurred significations, scorn interpretation, exasperated illusions. It is not a matter of applying an historical model but rather emphasizing the gaps.

Thursday 18 april – 8 p.m
Off-frame bodies
Luigi Pirandello and Alex Majoli are scene creators, but it is not only about interrogating visual setting and bodies’ means of apparition. Alex Majoli stages the projection of a fictional world from the experience of reality, and raise, through an ethical viewpoint, the question of the look on a represented reality. 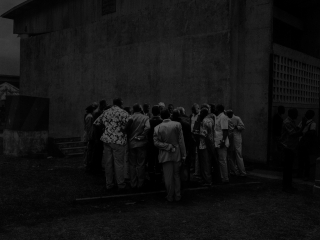