The Habit of Being

To go along with the exhibition, LE BAL and Editions Xavier Barral presentend Kate Barry, The Habit Of Being.

Kate had a skinny, intense, pleated beauty that moved incessantly, that laughed, and a distress I wouldn’t know how to describe but that was there, in the pleats, in her very vivaciousness. Her gaiety was her politeness, I think. She was extraordinarily kind. She was also extraordinarily approachable and down to earth, especially considering the world in which she grew up. She was “natural”, a weed like tall grass blowing in the wind, wild and frail at once. [...] Her photos show a very close relationship to what usually escapes notice, the “almost nothing” that Jean Rolin felt in the overwhelming need she had to film it. [...] In this landscape of an empty lot, which would ordinarily go unnoticed, she fled and perhaps found what was pursuing her, and what one sensed in her, which she didn’t hide.

If Kate’s landscape is a sort of empty lot, it has a vagabond’s soul. Trees overflow the pavement, outside the square imposed upon them. They split the asphalt, rising as though making an effort to catch the spring wherever it is. Kate photographed angles and corners. It seemed as though life had no way out. Yet she always slipped in a funny, perhaps slightly British detail, flattening the angles so that everything looks like a trompe l’oeil, a dizzying sketch where there was only a dead end. These lowly objects, these rubbish bins, these cracked paving stones, these sickly-looking bricks, you had to be Kate to see them and give them a soul, in a mirror, a small and vast and universal soul. [...]

With these walls, barriers and angles, another photographer would have leaned towards Rothko or a hermetic or mystical abstraction. But Kate—where did her incredible grace come from?—opened dead ends. She could put tenderness into an uneven pavement, a moldy gate, a pile of dirt alone in front of a closed door. She saw the maimed and crippled in the landscape. She loved them. In these forlorn places, almost comical in their dereliction, she photographed a flaw that was also a freedom.

From “That almost nothing”, published in Kate Barry, The Habit of Being, co-published for the exhibition by LE BAL and Editions Xavier Barral. 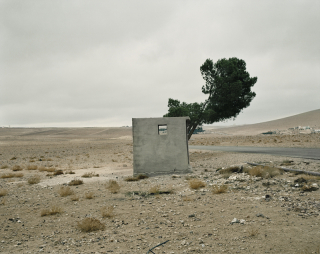 The habit of being