The daughter of artists Jane Birkin and John Barry, Kate Barry, who died prematurely in December 2013 at the age of 46, left a dense, magnetic body of work, produced quietly against the current of the portraits of stars and fashion photographs that marked her career.

Discovered belatedly, the photographs she made between 2002 and 2008 allow us to trace a unique process: cutting her favorite images out of contact sheets, putting these escaped images into an order, then enlarging those she chose for an exhibition wall. The testimonies of her loved ones, hints left in boxes, some work notes and snippets of correspondence with friends guided us in planning this exhibition, with all the humility such an endeavor requires.

The recurring figures of emptiness and abandonment, the extreme attention paid to the “almost nothing” she came up against, the obvious empathy for everything that surreptitiously resists, form a body of work built in silence and solitude, far from the spotlight.

These delicate, fragile fragments of a landscape-world captured during her wanderings elicit the pain in The Habit of Being,

the title of a collection letters by Flannery O’Connor that Kate liked so much she started making a film about the writer during a 2007 trip in the southern United States.

Beyond the images, they reveal the evidence of an instinctive gaze, all the grace of the present moment and the grave joy felt at being with the anomalous and incongruous

— a weed at the foot of a big façade, high-topped English shoes on a too-smooth slab, a huge burst of laughter, as though thumbing her nose at the past.

The book Kate Barry, The Habit of being published by LE BAL and les Éditions Xavier Barral, go along the exhibition.

Curators : Fannie Escoulen and Diane Dufour
Exhibition produced and conceived by LE BAL, in partnership with the Gallois Montbrun & Fabiani agency, and the Rencontres d’Arles.

With the technical support of : Picto and Circad. 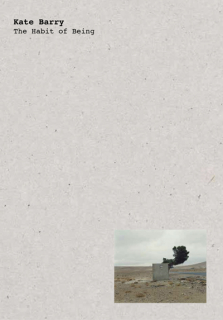 The Habit of Being