Within the gaze of Kourtney Roy lurks an icy humour in which the ordinary and the grotesque are mixed equally, so that it is always unclear which of the two leads the dance. This dance is troubling, for it draws us into a universe that, while above all narcissistic, at the same time leans towards anonymity.

Born in 1981 to a lumberjack father and a secretary mother, Kourtney Roy grew up in the vastness and loneliness of the snowy immensities of Canada. In these sublime but ominous landscapes, it is easy for a child to run astray. During her studies in Fine Arts in Vancouver, where she dreamed of becoming a painter, she discovered photography which, “through its fantastic potential, suggested a more troubling reality behind the smooth façade of appearance.” Marked by the morbid genius of Joel-Peter Witkin, her first series represent wild animals found dead in nature or preserved by the hand of man.

Her apprenticeship in fashion photography, following the path of Guy Bourdin and his obsessive and fantastical scenes, opened up a new unlimited field of vision.

Through self-portraits and auto-fiction, Kourtney Roy becomes the sole character of an interior theatre and all its enchantments.

Her body, artificially placed in a natural décor, lends itself to a surfeit of enigmas, to a thousand and one travestied and falsified lives. To quote Arthur Rimbaud : “I is another,” all the others. Laura Palmer multiplied to infinity.

For this immersion into the universe of the PMU, Kourtney Roy imbibed the words of Charles Bukowski and his obsession with the racetracks. Turning away from the spectacle on which all eyes are fixed, she infiltrates the coulisses. Their banal décor proves a more likely stage for the improbable.

Her body embeds itself thus in a world where everything can be something else and where anyone can be someone else.

This is a world in which objects – greenery, balustrades, binoculars… – have seized power. They dominate the scene, shifting from menace to invasion, from over brilliance to over muteness.

In her photographs, Kourtney Roy seems to be present in the world but absent from herself. The why of these incongruous postures, of these empty gazes, is elsewhere, off-stage, and captures us with a silent and hidden violence. For this body-object most often seems to be turned off, unplugged, eaten away, swallowed up. Impeccably sculpted, it nevertheless lends itself to camouflage, subtraction, dissolution, scrupulously orchestrating its own disappearance.

When one asks Kourtney Roy if these characters resemble her, she answers:

A book conceived by WhitePapierStudio et co-published by LE BAL, PMU and Filigranes Éditions coincides with the exhibition. 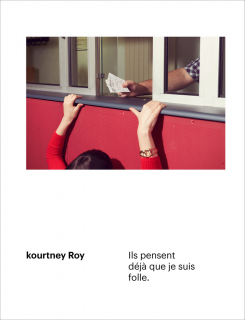