Due to the health situation and the ensuing measures, we regret to inform you of the closure of the BAL and the exhibition from this Friday, October 30th until further notice.

LE BAL presents the photographic work of the first period (1968-1992) of the Brazilian artist Miguel Rio Branco, a major figure of contemporary art in his country, known worldwide for his installations and multimedia works.

Miguel Rio Branco, a leading figure in Brazilian contemporary art, is a multi-faceted artist. At the age of twenty, he went to study photography in New York, where the city’s bubbling excitement nourished his poetic imaginings and his early canvases. He lived in the poorer areas of the Lower East Side, the East Village and the Bowery, where all the influences came together. There he befriended his compatriot Helio Oiticica, open to the most radical experiments. He was also in close contact with the innovations of an artist born and bred in the neighborhood, Gordon Matta Clark, who made “building cuts” in rundown apartment blocks.

Later on, back in Brazil, Miguel Rio Branco lived in the northeastern Region of the country, with its emerald prospectors, and then in the Pelourinhno neighborhood of Salvador, Bahia, where marginalized families and prostitutes survive in lodgings unfit for habitation.
In his photography, Miguel Rio Branco captures the bodies of men and women in all their glory and their weariness, their modesty and exhibitionism, with intentional close-ups, against backgrounds devoid of depth. His own gaze supports those of his models: nothing is evaded. His characters have their backs to the wall. As the artist himself has put it: “Photography most often oppresses or asphyxiates reality.”

As one moves closer, the images become oneiric, bordering on the grotesque, and finally overflowing, in the manner of Goya’s late works.

Miguel Rio Branco’s work has been described as an “outrageous reality.” His eye is drawn to disaster: imagination has no other way out than reality, in all its violence and immediacy. The injuries are like narrative sparks, with neither head nor tail: image-poems of the ruins of the world.

« Only a few of us, amid the great fabrications of society, hang on to our really childish reactions, still wonder naively what we are doing on earth and what sort of joke is being played on us. We want to decipher skies and paintings, go behind these starry backgrounds or these painted canvases and, like kids trying to find a gap in a fence, try to look through the cracks of the world. »
— Georges Bataille

Miguel Rio Branco (born in Las Palmas in 1946) is a Brazilian artist (photographer, painter, filmmaker and creator of multimedia installations) living and working in Rio de Janeiro.
In 1966 he studied at the New York Institute of Photography and in 1968 he left to study at the School of Industrial Design in Rio de Janeiro. Between 1970 and 1972, he worked in New York as a director and cinematographer, and in the following years directed several experimental feature and short films. At the same time, he began exhibiting his photographs in 1972.

His work has been the subject of numerous solo exhibitions, including Beauty, the Beast at the Art Institute of Boston in 2003; Plaisir de la douleur at the Maison Européenne de la Photographie in Paris in 2005; Solo at Kulturhuset Stockholm in 2011; Miguel Rio Branco: Nada Levarei quando morrer at the Museu de Arte de São Paulo in 2017 and Miguel Rio Branco at the Moreira Salles Institute in São Paulo in 2020.

The Knife on the Ground, original text from Jean-Pierre Criqui, Curator at the service of the contemporary collections of the Musée national d'Art moderne (Centre Pompidou), will be published in the exhibition's book (co-edited by Toluca Éditions, LE BAL and RM-Publishing house).

The exhibition will be extended throughout November at the Gare de l’Est with a unique installation by Miguel Rio Branco, presented by SNCF Gares & Connexions and LE BAL and produced in partnership with Initial Labo. 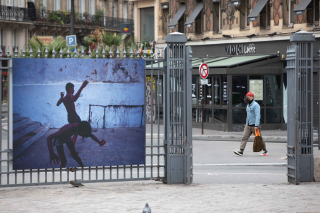 FROM OCTOBER 14TH TO DECEMBER 6TH