How can a certain state of today’s world, when the paths of many individuals have become so unsure, be made visible? If the plight of those without documentation, a job or a status boils down to socio-economic data disseminated by the media or experts’ reports, how can their experience — of being on the edge, in an in-between state, in the meantime between a bygone past and an opaque future — be transcribed? In connection with the En Suspens exhibition, these films consider three avenues for understanding the ambivalence of that state.

“We had to wait. Wait. An undocumented migrant spends more than half his time (his life?) waiting for something. A smuggler’s answer. Reaching an unknown destination or a makeshift port. The good faith of a contact. Meeting a friend. The good will of an employer with an under-the-table job to offer. Amnesty. A presidential election. The election of a left-wing government. The defeat of that same left-wing government in the next election. A demonstration by intellectuals. The occupation of a church. Deportation… In short, above I said that the future cannot be discussed with people living in a state of time made of immediate little futures. I would add that there can no longer be a question of a future for those who spend most of their days waiting for something to happen.”*

From direct cinema to 3D animation, montage of teaching materials and documentary fiction based on testimonies or photographs published in the press, each film in the series takes a different approach to looking at the mechanics of waiting.

Tuesday 27 March 8 pm - The cadastre of our lives

Bureaucracy — norms, procedures, rules, red tape, indicators, categorisation — has become so much a part of our daily lives that it is now invisible and participates in distancing the world. Based on a true story, Empirical Data, presented at Documenta 14 in 2017, follows Georgian actor David Malteze’s Kafkaesque journey from his arrival in Greece as a young immigrant to professional success. A different sense of strangeness and unreality permeates Algorithm, which immerses viewers in the world of high finance. The normative process of alienation is pushed to its extreme in Section 4 Part 20: One Day on a Saturday, which, through letters and postcards received by a prisoner at Camp Delta for six years, denounces methods of controlling bodies.

Tuesday 10 April 8 pm - The march of progress: a world without man

Just as machines elicited fascination at the turn of the 19th century, today investors are rushing to snatch up stocks in robotics and automation companies. Utilitarian, educational, entertaining or assistance robots have a bright outlook (an estimated 42 million of them will be in homes worldwide by 2019), but it is accompanied by the need to redefine work for man, whose role seems sidetracked. That unsettling observation is echoed by the films presented here, which respond to another threat to man: environmental catastrophe. Urth concludes the evening with a narrative of anticipation about the defunct Biosphere 2 artificial ecosystem project in Arizona. Through a log kept by a female character, who methodically records the vertigo of an almost-life, the film prompts us to meditate on our state of waiting. 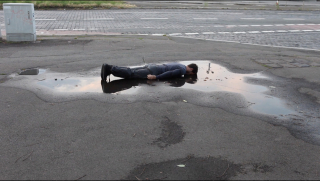